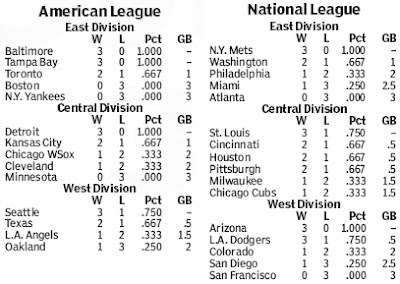 It all means nothing…

An easy way to summarize the first weekend of the Jays season would be to say, it could have ended in disaster. But Toronto’s bullpen and bats came through and bailed out the starting pitching. My favourite moment of the weekend had to be when Jose Bautista homered immediately after Masterson threw inside twice to Kelly Johnson. Also, Edwin Encarnacion has been amazing in the clutch so far.

The big story for me was that Joel Carreno was sent down to AAA. My immediate reaction was that Alex Anthopoulos has high expectations for the starting rotation. And if you think about it, Carreno wasn’t horrible considering that it was only his first career start and the two home runs he gave up were to the same player. After sleeping on it, I think that the Jays are sending him down to get at least one start until later in April. Until then, the Jays can get by with a four man rotation. I think we’ll see Carreno get recalled later this month.

Overall the Jays bats were relatively cold this weekend. It could be due to the weather, or it could have also been caused by all the sinker-ball pitchers Cleveland threw at them. It’ll be interesting to see how the lineup fairs indoors at Rogers Centre tonight versus the Red Sox.

So here are the 3 Stars for the weekend series:

So, unless the Cardinals swoop in and sign Prince Fielder, it looks like the Reds are going to run away with the NL Central in 2012… Not only have they traded for Mat Latos, one of the best young starters available, but they’ve also got one of the bullpen bargains of the off-season (Sergio Santos notwithstanding) in signing Ryan Madson to a four year $44 million dollar deal one year $8.5 million dollar deal. Based on starting pitching, the Brewers and Cardinals could make it interesting, but I don’t think that they can match Cincinnati’s offense.

Yet another post about the AL West… I’ve been thinking about the Oakland A’s a lot lately. It seems that they don’t have the payroll, fan support, revenue, or players to compete and they’re heading down the road to San Jose irrelevance very quickly. Billy Beane seems to be focused on trading away all his major league talent for prospects which is a genius move. He understands the the A’s have absolutely zero chance of competing in the near future with Anaheim and Texas. His plan is to give up, wait 5 years for Pujols’ 40 year old body to completely implode and Yu Darvish’s contract to expire. By that time, his stockpile of prospects will have matured, they will have moved to a new stadium in San Jose, but they’ll still lose in the ALCS to the New York Yankees because Moneyball doesn’t work…